Room: A Novel by Emma Donoghue

Reposting this review because Room is the Kindle Daily Deal on Jan 5 and on sale for $2.99 for kindle. (Only on sale on Jan 5).

Imagine your mother was kidnapped before you were born and was forced to live as a prisoner in an 11 x 11 ft shed (the “Room”). Imagine that you were born in the Room and had never seen the world beyond its four walls. Finally, imagine at the age of 5 you are asked to explain what life is like living in the Room. That is what this book is about.

It is written from the perspective of a 5 year old, which makes the storytelling so compelling. Kids already have a difficult time understanding certain nuances and details in life that we adults take for granted. But even more so for Jack, who only knows the outside world from what he sees on TV and what Old Nick, his mother’s captor, brings to them for “Sundaytreat.” Here’s the first line from the book:

END_OF_DOCUMENT_TOKEN_TO_BE_REPLACED

In the Basement of the Ivory Tower: Confessions of an Accidental Academic by Professor X

Takeaway: College may not be for everyone.

Professor X challenges the American notion that everyone should go to college, and that everyone who can sign a loan application is college material. It’s a very thought-provoking thesis, and one that’s hard to argue against. The college degree is losing its value partially because it’s so frequently misused as a minimum qualification for jobs that probably don’t need it. Police officers, video store managers, nurses, car salesman… these jobs cover a wide spectrum of specialized skills and knowledge, yet all now require at least a two year degree. But no one seems to be asking why.

END_OF_DOCUMENT_TOKEN_TO_BE_REPLACED I first heard of Klosterman a few weeks ago on Bill Simmons’s BS Report podcast. I enjoyed his analysis of Charlie Sheen, the Oscars, and rock music. This book seems to be his most popular, so I figured I’d start with this one. Overall, I thought he had some entertaining and thought-provoking discussions on subjects I wouldn’t expect to read much about (e.g. Saved By the Bell and The Trix Rabbit).

Reading through some of the negative reviews, it seems as though a lot of reviewers let their disagreements with Klosterman’s theories dictate their opinion of the book. I didn’t agree with everything he had to say, but that wasn’t really the point.

One of the benefits of multiple reviewers is that we can read the same books and give our different takes.  Adam’s previous review of Unbroken is here.

Louie Zamperini has an incredible story. It’s amazing what one person can experience in a lifetime. His story made me really think about what I would do if I had to go through what he did.

While I don’t think Hillenbrand intended to make any political statements with the book, I couldn’t help but think about Louie’s story of torture and the current debate in our country on gathering intelligence on prisoners of war. Hillenbrand gives you a little bit of history on Japan during World War II.

END_OF_DOCUMENT_TOKEN_TO_BE_REPLACED Economics has always been fascinating to me. I regret never taking an economics class in college. This book broke down a lot of economics principles into an accessible format that left me wanting to learn more. I wouldn’t call it Economics for Dummies. It’s somewhere in between Economics for Dummies and a college textbook for Economics 101. Wheelan doesn’t talk down to you; you’ll have to use your brain a bit. But the writing style is such that you will genuinely enjoy reading the material. He covers, among others, global trade, the Fed, inflation, and the government’s role in a free market. Make sure you get your hands on the latest edition, as he covers the economist’s take on current events like health care reform and the Great Recession. Whereas Freakonomics used economics principles to turn a lot of conventional thinking on its head, this book explains why those principles work the way they do and helps you use them to analyze any policy like an economist.

If you have the slightest hint of interest in this subject, this book is probably a great place to start. 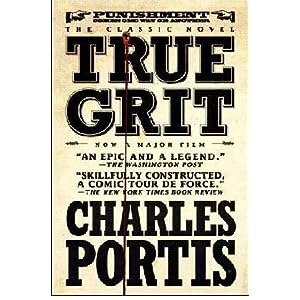 I think 5 stars should only be given to the best of the best – this is one of those books. True Grit is fantastic. I suspect that the Coen Brothers film adaptation will bring some well-deserved attention to the book, or at least I hope so. Even though I’ve never read a Western and probably never will again, I couldn’t help but be immediately drawn into the story of horses, pistols, and campfires. Young Mattie’s narration and turn of phrase is unforgettable. It’s a really short story and worth every second. Read it. I will be shocked if you don’t love it.

The Facebook Effect: The Inside Story of the Company That Is Connecting the World by David Kirkpatrick Undoubtedly the most exhaustive book on Facebook’s history, development, and future going forward. If you’re just looking for a quick read in the form of a novel, check out Mezrich’s The Accidental Billionaires: The Founding of Facebook: A Tale of Sex, Money, Genius and Betrayal. Mezrich’s book is based on a lot of anonymous sources, whereas this book is sourced by current and former Facebook employees, including Mark Zuckerberg.

The book also explains Facebook’s evolving advertising strategy, privacy concerns, and profit model. Like I said, it’s an exhaustive book. If there’s anything you ever wanted to understand more about Facebook, it’s covered. (Although I was a little surprised Kirkpatrick never wrote about this Zuckerberg interview.) Facebook is a fascinating company. While its growth and value have grown exponentially to levels never seen before in history, it wasn’t until late 2009 that the company actually turned a profit. Until then, Facebook was burning through cash raised through a series of investments. All along the way, CEO Mark Zuckerberg, who controls 3 of the 5 seats on the board, has stayed focused on growth and the user experience at the expense of running the business for a profit. He turned down numerous opportunities to sell the company because he is motivated his conviction of what Facebook can mean for the world.

As the world becomes more digital, new companies may begin to look and function like Facebook. Twitter, for example, had a similar explosion in growth and value before seeing $1 in profit. Facebook is changing the way traditional companies and media reach and interact with consumers. At nearly 500 million accounts worldwide, Facebook cannot be ignored or dismissed as a fad. There is no doubt that the “Facebook effect” will only grow stronger, for better or worse. If you don’t believe it, read this book.

Guest post by David Sawyer, a lawyer in Atlanta, married to Ashley, and in my small group. Find him on Goodreads a online community for readers.

Takeaways: As a guy who initially loved Bush and then grew to strongly dislike him over the years, I was pleasantly surprised that I enjoyed this book.

It’s really difficult to trust any review you read about presidential autobiographies. Reviews tend to veer off into praise or criticism of the president instead. I did my best to assess the book as written and tried to avoid letting my biases color my review. In full disclosure, I proudly voted for Bush in 2004. (I was a year too young to vote in 2000, but I would have likely voted for Bush then as well.) Around 2005-2006, I became very discouraged by his presidency, and my political views began to change.

If you value pure readability and enjoyment in a book above all else, then this book will not disappoint. W writes (or someone else writes) as W speaks. The Decider’s tone screams off the page. That’s not a bad thing though. Also, the book is structured as chapters devoted to critical decisions Bush made throughout his life and how he made those decisions. It’s certainly much more interesting as a narrative device than a play-by-play of his life or years in office.

My issues with the book have more to do with some of the decisions he made and how he made them. In that respect, some chapters were better than others. For example, the chapter on his decision to fund stem cell research was great. Based on the way he tells the story, it sounds as though he really consulted with experts on the issue from every corner and sought counsel in his conscience and prayer. Even if you disagree with his decision, it’s hard to argue with that process. That’s what we should expect a good president to do.

Compare that chapter to some of the others, namely the decision to invade Iraq. His recitation of the events leading up to that decision is questionable at best, and some of his factual omissions are almost laughable at times. If I wasn’t independently familiar with the invasion of Iraq, I would be thoroughly convinced that Bush made the right call. The stem cell chapter presents his decision making process as that of a judge – listening to the facts on both sides and using his best judgment. The Iraq chapter is more like a prosecutor’s closing argument to the jury – he’s not lying, but he’s only giving you the facts he wants you to hear and omitting the ones that will give the jury reasonable doubt.

But it’s no secret that the book also doubles as a PR project, so no one should expect anything different. He is completely unapologetic about the decision to spy on US citizens, Guantanamo, and waterboarding. If his “ends justifies the means/come hell or high water/trust me, I know best” rationale bothered you during his presidency, you will probably find yourself arguing with him outloud as you read this book.

But again, that starts to blur the line of criticizing the book or the president. Honestly, I think you can be a hard line, left wing liberal in the most stereotypical sense and still enjoy the book, if you’re realistic about your feelings at the outset. On the other hand, if you’re a huge Bush fan, you will obviously love the book. But my advice to you would be to read other books and material as well to get a well-rounded view of his presidency. Don’t go around quoting Decision Points as a primary source.

I would love to have more guest posts.  If you want to post a guest review let me know.