The Book of Three by Lloyd Alexander 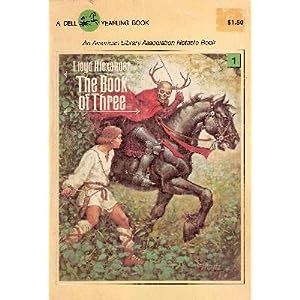 Summary: A teen leaves home to fix a problem he created and stumbles of a task to save the kingdom from a great evil.

This blog is not going to become a young adult fantasy book review blog.  But I am enjoying re-reading some of the books of my childhood.  There will be some more weighty books reviewed later this week.

The cover of The Book of Three shown is the cover of the copy that I had when I first read the book.  It has been updated, but I still like this cover.  It shows well Taran, the main character and the Horned King, the expression of evil for this book.

Taran is a teen who has been raised on a farm.  It is all that he has ever known and he has rarely ventured off of it.  He is given the lofty title of ‘Assistant Pig Keeper’ early in this story.  And it is because his pig runs away (a very special pig), that Taran leaves the farm and searches for it.  He stumbles across the Horned King and some of his men (and is injured by them) and then is found by the good war leader.

Eventually the major characters of the series are found and Taran and the others must make their way to warn that the Horned King is amassing an army to destroy Pyrdain.

This series is a very good introduction to epic fantasy.  It has been called Lord of the Rings Lite by many.  And most mean it as a compliment.  There is a lot of Welsh mythology that is hinted at in the series.  Like the best of epic fantasy, it is primarily concerned with the fight between good and evil.  This is a very good book to read aloud to 8 or 9 year olds.  There is action, but it does not glorify violence.  Taran is a good character, but he makes mistakes and learns.

Like the other books of my childhood that I have read lately, it seems much shorter and simpler than I remember.  There is one basic plot point and one basic quest.  The ending is satisfying, but very muted, because the majority of the action happens off stage.

This is a series where I wanted to be Taran.  He was a bit older than I was as I was first reading the books, but the good parts of him were achievable.  He was not a great magician, he was not a strong warrior, he was not supper intelligent.  His strength was that he was good, if a bit impatient to grow up.