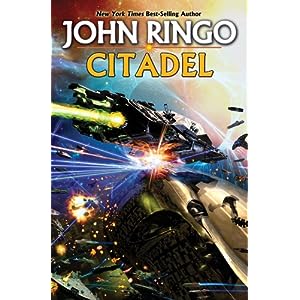 Takeaway: Not really a fan of travel for work, but I am glad for fairly mindless audiobooks to keep me entertained.

I can tell I am traveling because I am burning through audiobooks.  When I travel it mostly to do program observations of after school programs and then right up reports or do data analysis.  I do not watch tv at night, I work, usually with an audiobook in the background.  And I often visit two or three sites in a day so I can put 50+ miles in a car, in traffic.  so another hour or two of audiobook time.

Often I really am fairly fried.  Not enough sleep, too much coffee, bad food and long days.  So I tend to focus on fairly light fiction.

Citadel, the follow up to Live Free or Die, fit the bill nicely.  Fortunately, Ringo knew that we needed more than just the hero character from the first book.  In this second book there are a lot more story lines and a lot more points of view.  It is not quite space opera, but it verges on that.  About 8 different story lines that work together fairly well.  The characters are a mix of superstar and everyman, so you are not getting hit over the head with almost superheroes making every decision right but things do fit into place fairly nicely.

About 20 years goes by from the beginning of the first book to the end of the second book.  So there are some time gaps, but they are mostly taken care over quickly at the beginning of the book.  I also was happy that the political rhetoric was toned down.  There is still the common science fiction idea that humans will be better than most other alien species because of our independence and ability to learn quickly, but that is really a matter of the genre, rather than politics.

Overall it was a good follow up.  Book three is up on Amazon for pre-order, but it does not have a release date.

[…] seem to have worked.  I will try again later today.  But until then here are links to a review of Citadel Rising (book two after Live Free or Die) by John Ringo.  Three Non-fiction Kindle books.  And a Read […]