Culture Making: Recovering Our Creative Calling by Andy Crouch – 2011 Books of the Year

This is the one of the first books I read in 2011.  And it actually came out in 2010, but still I think it is a book that more people need to read.  The evangelical church needs to recover a sense of secular vocation and Culture Making presents that better than most that I have read.  Andy Crouch is one of the most innovated thinkers of the modern Evangelical world and his new project with Christianity Today on the City and the Church continues to show that.  You can see the roots of Culture Making in his current project. 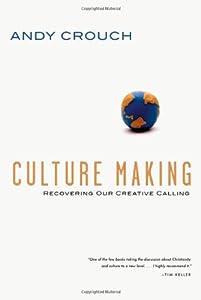 Takeaway: If you work in a creative field inside or outside the church and you have not read this book, you are doing yourself a disservice.

It is common for me to recommend books that I am currently reading.  After all they are in my head, I am thinking about them.  I think everyone else should be thinking about them so I can talk about the ideas that are in them.  But this is a book that I honestly think most Christian need to read.

Much of the Evangelical project of the last 50+ years has been about calling the world to God.  And while I think the Evangelical church has been rightly moving toward a better sense of engagement with culture, I think that most Christians still think about culture too simplistically.  Culture Making is a serious look at how culture impacts faith, how we as Christians can impact culture and the value of focusing efforts toward creation, not just in the church but for the whole world.

In many ways this book is about recoving a sense of vocation (although it does not use that term much.)  For Crouch, we all have a role in culture and therefore our roles as Christians are to act as Christians in culture by using our God given talents.  But what I like is that Crouch does not just say, “go and do.”  He really examens the fact that none of us as individuals really have the ability to either predict where culture is going, how our creativity will be recieved or to actually make a long term change in culure.  Even those at the highest levels of power have very limited effects on culture.  In some way this fits in with my pastor’s take away line from his sermon last week, “Do for one what you wish you could do for everyone.”  Crouch wants us to go out and do, whether large or small scale what we think that God has called us to.  But he reminds us to go and do with others.

The call to be culture makers is not without its dangers.  Crouch notes quite wisely that, “If our excitement about changing the world leads us to the grand illusion that we stand somehow outside the world, knowing what’s best for it…we have not yet come to the reality that the world has changed us far more than we will ever change it.  Beware of world changers, they have not yet learned the reality of sin.”  Crouch is not calling for utopiean visions, or political take overs.  He is calling for great and small works that nudge culture to God.  The utopiean visions will always be corrupted.  That is part of the reality of sin and power.

In spite of the warnings and caveats, in the end I was inspired like few other books I have read recently.  I will read this again.  I think you should too.

Thanks for posting this. I’ll have to add this one to the “to read” list.

Passion Is Not Enough: Four Elements to Change the World by Greg Darley | Mr Shields: I'm a reader not a fighterJanuary 19, 2011 at 6:51 am

[…] be explicit and say doing what God tells you is important even if it is small.  On the other hand, Andy Crouch has a very good section about how even very powerful people cannot really change many things.  So maybe it is even more […]