I am on a self imposed book buying fast.  I am trying to work through a significant portion of my long backlog of books between now and the new year.  Divine Justice was free on Audible.com.  (It still is as of Aug 14, 2010.  You need to get the audible.com software for a blackberry.  It is a promotional book for downloading the software on your phone.  I do not know if there is also a free book with other phone software.  There is not currently a free book with with the audible software for iphone/ipad.) 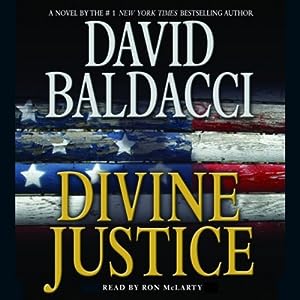 I listened to the majority of this book while running errands and cleaning house on Saturday.  It is not all that long, about six hours.  I doubt I would have picked it up if it were not free.  I don’t tend to pick general fiction books, unless I get a lot of good recommendations for it.  Divine Justice, is a semi-political spy story.  An ex-CIA hitman takes out several bad guys, one of them a Senator.  The rest of the book, he is being chased.  His old team is trying to help him out without getting noticed.  And there is a side story with the protagonist hiding out in a small mining town and getting caught up with some strange local matter.  (Think the A-Team.)

The most annoying part, is that the supposed professionals, both government and the friends of the protagonist, keep explaining what is going.  The way that always seems to happen is that one person doesn’t understand why the other is doing something, so we get a detailed description of what the next step is going to be.  It is pretty clear what is going on if you have watched any movies or read any spy novels.

The production of the audiobook is mixed.  The narrator is fairly good, but it annoyingly has background music at a number of points.  There are even background “gun shots” at a couple points.  In my mind, the story is most important.  Interlude music is OK if it is occasional and if it is only used to signify changed setting or chapters.  But I don’t think music should ever be used as a soundtrack to build suspense.  Most of the time it just feels cheesy.

The best part of the story is that it is fairly short.  The ending is more than a little far fetched and the way the story lines come together seems contrived.  It would make a good beach read if you do not want something too deep.  There is some action, a short love story, and an ending where all the good guys win and the bad guys get caught or killed.  I cannot complain for a free book.  But I would be disappointed if I had paid much for it.