Drive: The Surprising Truth About What Motivates Us by Daniel H. Pink 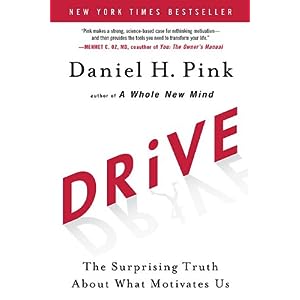 I have been hearing nuggets about the book Drive fairly regularly since it came out last December.  Finally after yet another positive review from Tony Morgan, I picked it up.

Drive is fascinating, although a little repetitive.  We are told over and over again, that the science of motivation is far from the business of actually motivating people.  That much of what is done in the business and non-profit world to motivate people, cash bonuses, flex time, etc. either does not work to motivate in the ways we think or actually hurts motivation.

I am interested in it this week because I am at a training for staff of the after school program in Chicago that I consult with.  And I have been intentionally thinking about how I could use some of Pink’s insights to change motivation with the after school program.  Frankly, I have mostly come up short.  The basic idea according to Pink is to give workers autonomy to get their work done in the way they want to do it and to focus on what they, as the worker, think is important.

In the non-profit world, the financial incentives are already fairly small.  There are not a lot of bonuses.  But I do think that some of the verbal motivations, organizing around mission and releasing people, allowing people to work their own hours but hold them accountable for results, not the input (hours worked) can be done in a non-profit.   I purchased two copies, one for the after school program and one for my Mother-in-Law (a principal).  Both education and non-profits are specifically mentioned with several examples.  But mostly in negative examples.  For instance, Pink is highly critical of the pay for performance model of education that is catching steam.  He says that people that are motivated by money actually perform worse in the long term than those that are motivated by more intrinsic motivations (like mission, social cohesion, religious motivations, etc.)  While he does not spend a lot of time making positive suggestions about how to re-organize schools for better motivation, he does show why he thinks that pay for performance will actually harm motivation.

There is also a useful section at the back on the current field of business writing.  If you have not read a lot on business organization, this section will give you great ideas on where to go next.

I do not think that Drive is great writing, although it is not by any means the worst business psychology book I have read.  But I do think that what Pink is talking about helps to explain the weaknesses of the purely rational, capitalistic financial system.  If we were purely rational and financially motivated, we would not have people devote their lives to non-profit or government causes except when they could not do anything else.

Thanks for sharing insight about the book! I need to purchase a copy.

I think you will like it from what I have read on your blog.

helpful review here… thanks. I have thought about picking this one up on multiple occasions and you put me over the edge.

Tweets that mention Drive: The Surprising Truth About What Motivates Us by Daniel H. Pink | Mr Shields: I'm a reader not a fighter -- Topsy.comAugust 7, 2010 at 1:23 pm

[…] This post was mentioned on Twitter by Adam Shields, Adam Shields. Adam Shields said: Review: If you work with people you need to pick up Drive by Daniel Pink. Find out what motivates us (it is not money) http://wp.me/pE5zo-oi […]