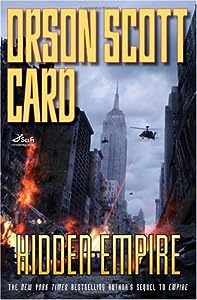 I LOVE Orson Scott Card.  I have read almost everything that he has ever written.  I really like the Ender Series.  Although there are some ups and downs with that.

Orson Scott Card does with Science Fiction (which is what I consider this, even if it is near term political drama) what I look for out of Science Fiction authors.  I want to deal with ideas and philosophy and creation of utopian and distopian societies to help us understand what is important about life right now.  I think this is what some people don’t understand about Science Fiction.  Most Science Fiction is not really about the ray guns and the spaceship, but about ideas.  It is hard to really play with society and philsophy when you are stuck in the day to day world we live in.  But when you can create your own society and your laws of physics and economics and language and travel you can move past the mundane to see what is important.

The Hidden Empire is the second of what I think is going to be a long series.  My guess is that we are looking at 4 or 5 books minimum.  And because it already has a movie deal and a video game franchise associated with it, there will be some incentive to keep it running.  The first book introduces the main characters, allows a civil war in the US and does what almost no book is really allowed to do, (spoiler alert, highlight blank area if you really want to know) kills off the main character about half way through the book.

This book introduces a plague that could kill off half the population of the world.  The political parts deal with how a beneign “dictator” really works through a monumental problem like that.  There is still shooting and war and heroism and dying.  But the bulk of the story is really a political thriller.  But it is a smart political thriller.  How many other political thrillers reference Rodney Stark (a significant figure in Sociology of Religion and History of Christianity) multiple times.

What I like about Card is his children.  He seems to know how to write almost impossibly intelligent children in a way that is not only believable but make me want to strive to find and nurturer these children.  Procreation and child rearing as destiny are themes that are almost always in Card’s books.  And this is no different.  Parents stuggle with properly raising their children and those parts are very real to me, even if I don’t have children and likely never will.

The other interesting aspect of Card, is his use of religion.  Card is Mormon, but almost always makes his main characters Catholic.  And he takes great respect with their faith.  Some Science Fiction writers disdain God, but Card treasures the concept of God.  It is not always my God, quite often a fairly distant God (more of a clock maker setting things in motion, than active God, interacting and participating in our daily lives.)  Card’s philosophy is never completely secular or detached from morality.

If I were reading Card for the very first time I wouldn’t start here, unless you really like political thrillers (then start at Empire, the first book in this series.)  My first book would be Ender’s Game.  This is one of my all time favorite books.  It is the most like a young adult novel that Card has.  The rest of the series are not young adult at all.  So if you don’t like young adult try another one.  Two others that are not as well known but I really like are Pastwatch (a retelling of Christopher Columbus with time travel) and Enchantment (a retelling of the story of Sleeping Beauty.)

I was on Yahoo and found your blog. Read a few of your other posts. Good work. I am looking forward to reading more from you in the future.

Actually, these books came about because of the video game — not vice versa. Read more about in under the Wikipedia entry for Shadow Complex.

[…] book, but it is good.  In many ways I like this better than Card’s recent Empire series (my review).  As always children are a very important part of Card’s […]