The Broken Gun by Louis L’Amour 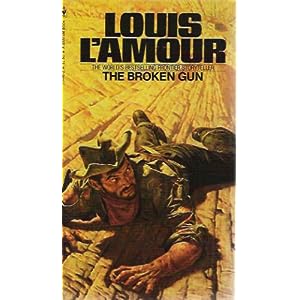 Takeaway: A classic western that was actually set only a couple decades ago.

Westerns were a staple of my teenage years.  I was not a ‘manly man’.  I have never really liked competitive sports, but I like hero stories.  I think that is what I liked about the classic westerns.  My uncles were big Louis L’Amour fans so I always had a ready supply of westerns whenever I wanted free books.  I have read the majority of L’Amour’s books, but The Broken Gun was one I had not.  For the most part L’Amour wrote historical westerns or early American settler stories.  I have only read a couple of his modern stories.

The Broken Gun is a classic western, man passing through town, a murder, power and corruption beyond the reach of an under-powered but honest law system.  There is a strong woman who is single (widowed in this case) that needs rescuing.

The twist (and it is barely a twist) is that the man passing through town is a western writer and it is set sometime in the early 1970s.  The author is not just a writer, of course.  He was a former ranch hand, he fought in Korea and happened to have an army friend in the area that was in trouble.

This was probably Louis L’Amour playing at bit.  L’Amour was a writer, that had been in the Army, had taught wilderness survival skills in Arizona where this book is set and was a famous writer at the time this was written.

There is nothing surprising here.  The good guy will win.  And it will probably be a while before I pick up another western.  But it was good for a couple hours of passing time.