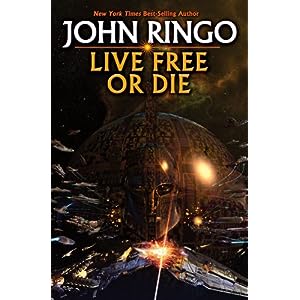 Takeaway: It seems most modern science fiction authors have become small government conservatives.  But apart from the political ‘speechifying’ it is a good story.

I really like John Ringo.  This is the fourth series where he was the author or co-author and I think I have read every book in the previous three series.  The ones that are good are very good.  But there are several that are very bad.

This is the start of a new series.  There are some similarities to the Empire from Ashes series by David Weber (who coauthored the March to the Sea series with John Ringo).*

Basic set up is that in a time period just barely in the future, a gate to another world shows up.  The Earth enters a depression because they don’t have anything to trade.  A super intellegent rugged individualist that happens to have been a science fiction comic book author meets an alien at a comic book conference.  The aliens like his comics and agree to run through potential trade good.  They find something that the aliens want badly and he is suddenly the richest guy in the world.

There are, of course, bad aliens that want to take away all the good stuff.  And bad politicians that want to tax everything away or concede everything to the bad aliens.  The news media is always on the wrong side of things, but our hero starts making plans to defend earth, while making a ton of money.

I have always said that the best part of science fiction is the ability to play with ideas.  But with military focused science fiction (what Baen primarily, but not completely focuses on) the ideas are a smaller part of the book and often are fairly overt libertarian political commentary.  This is not Asimov, Heinlein or Card.  But it is a pretty good story line and when it doesn’t get too wound up in details can be pretty good writing.

It is good enough that I have picked up and started the second book.

*The First books of Empire from Ashes, March to the Sea and a ton of other books are free at the Baen free library.  They are in DRM-Free multiformat.  So if you have a reader, they have a format that will work.  Also if you are looking for book not in the free library, the Fifth Imperium (my blog post about Baen and Fifth Imperium site) has a ton of the rest of the books in the series for free.

[…] the follow up to Live Free or Die, fit the bill nicely.  Fortunately, Ringo knew that we needed more than just the hero character […]