A Visit to Vanity Fair: Moral Essays on the Present Age by Alan Jacobs 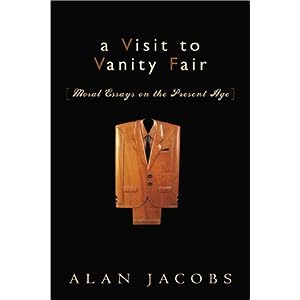 I do not often read books of essays. Frankly, I do not frequently read essay length works. I read a lot of blog posts and I read a lot of book length works. But the essays are difficult for me. Jacobs is a very good essayist. And that is why I wanted to read the book. He was (and is) a professor at Wheaton College when I was there, but I did not have him (and do not remember meeting him.)

Over the past couple years I have follow his blogs and writings fairly closely, but this is the first book of his that I have read. I bought it a bit over a year ago to take to the beach (found it for $3 including shipping on Amazon.) Unfortunately it ended up in my Sister-In-Law’s beach books and I forgot about it until I went to the beach this year.

There were 15 essays (in about 170 pages).  Three were exceptional.  The most striking was the essay on what we leave out of Children’s bibles, and why.  At the time he wrote the essay, his son was just old enough to really be reading children’s bibles.  My niece is about the age where I am starting to regularly read to her from children’s bibles too.  So it may be the shared experience, but the fact that there are portions of scripture that we are sort of ashamed of, or do not think appropriate for children (because of violence or sex or a God that we are uncomfortable with) is both insightful and important to think about.

There is also a very good essay, that is very dated now, about Harry Potter.  He was writing this between the 4th and 5th books being released.  I think that this essay was the basis of many Christians shifting their thoughts about Harry Potter (or maybe it is about the same time that many Christians shifted their position.)  I am pretty sure I read a version of this essay when it was originally written.

Overall, I like Jacobs most when he is writing about writing or reading.  (Although I never really get any of his stuff about poetry.  I have never really understood poetry.)  The third essay that I really liked was the introduction.  I am a fan of introductions.  I know many people do not read them, but I found found several introductions that have been better than the book as a whole.  This introduction has some relevance to my current project of reading about how to disagree as Christians.  In the introduction, Jacobs talks about Samuel Johnson (an early British essayist).  Jacobs, in context of why he calls this a book of moral essays, says,

“…charity…does not require indiscriminate endorsement of people or ideas. I would not be practicing love toward God or my neighbor if I were to smile benignly on and unjust social order.  It is not charitable to refrain from moral judgement: when Jesus says “Judge not, lest ye be judged,” he is forbidding condemnation, not discernment.”

Jacobs, in the spirit of Johnson, says “…the moral essay…at its exemplary best: striving for charity but passionate in its sympathy for human pain and weakness; aware of the powers of writing to help us enjoy or endure our lives, and agonized when those powers are neglected or abused.”
Later he quotes an essay by Kierkegaard that illustrates what he means by charity.

I…am a human being, neither more nor less; and I assume that anyone I may have the honor to engage in conversation with, is also a human being.

Johnson, and Kierkegaard and Jacobs, all want to have a conversation with meaning. A conversation that is just ‘talk’ is one that “must be eradicated if we are to teach and learn fron one another.” I mostly agree. But I also want to know the other person, in a way that allows me to truly see them as a human being.  So I want the conversation with meaning, and I want the personal talk.  But in all of it, I want to treat the other, especially the one that I am disagreeing with, as a human being, made in God’s image, a child of God, and potentially a brother or sister in Christ.