The Meaning of Prayer by Harry Emerson Fosdick 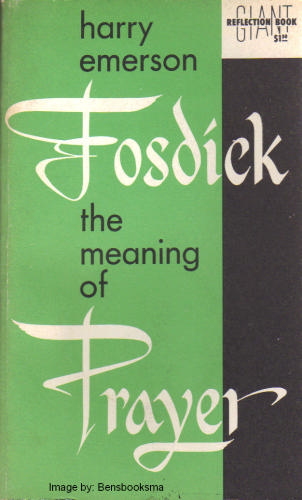 Takeaway: I read on the basis of a recommendation from Eugene Peterson’s book Pastor. It was good, especially for free.

I read Eugene Peterson’s The Pastor: A Memoir (my review) twice in the two months after it came out.  It is very good.  I want to pick up Peterson’s Take and Read: Spiritual Reading: An Annotated List.  It sounds like my kind of book, a long list of books with short statements of why they are useful/important/interesting.  I will pick it up eventually, but first I am reading a couple books Peterson’s mentioned in The Pastor.

Fosdick’s The Meaning of Prayer is the first.

Peterson interviewed Fosdick for a project in seminary after reading this book.  Fosdick was thought of not only as a liberal, but a heretic and worse in some circles.  Peterson was struck that no one could have written this book and been a heretic and even more struck once he met Fosdick.  This helped shape Peterson’s understanding of the way that we often characterize those that disagree with us.

It is free on Google Books (I read it on my ipad mostly, with a little on my android phone, there is very good syncing.)

It is not a long book and has an interesting structure.  It is designed with daily readings that are devotional in style and length but oriented around a topic in prayer and then about 10-15 pages of content to round out the chapter.  It would make a good group discussion book because of the way it is written.  I spread out the reading but did not follow the weekly plan.

I am not going to really review it, it is almost 100 years old and after a bit more than half I was distracted by some other books and decided to not go back and finish.

But I am going to talk about the good thoughts I found in it.  The first is when he talks about the variety of religions throughout history and says that everyone prays.  It is part of our ingrown tendency as humans to reach out to something when we are in trouble.  He takes this idea and compares it with other tendencies.  The tendency to love is in everyone, but if just an impulse will be “brutal and fleshly”.  Love, disciplined, builds Christian homes and serves the neighbor.  Intelligence undisciplined will never make a difference in the world.

Undisciplined prayer becomes ‘spasmodic and frantic’.  God hears those prayers, but prayer is a different quality and primarily it is self focused.  We pray when we are in need of help.  Fosdick calls this the difference between BC and AD prayers.  (This is at least partially his attempt at separating himself from some of the more distasteful prayers against enemies in Psalms.)  But Fosdick takes seriously a difference in Christianity about the first being last and about the highest goals are for us to be a servant to others.

It is always interesting to me that many complaints about the church are not original.  “Our failure in prayer is partly due to the revealing temper of our generation, which in its splendid enthusiasm for work has neglected that culture of prayer, on which in the end the finest quality of spirit and the deepest resources of power must depend.”  So he was complaining that people did not pray because they were too caught up in the pressures of work too (and here he was directly meaning the work of the church, not just work in general), and he did not have TV and internet, multi-site churches or mega-churches to blame it on.

Another unique comment is that prayer is difficult because it is so accessible.  “There are plenty of people in London who have never seen the inside of Westminster Abbey, partly because they could go there any day.”  If we were only permitted to pray a couple times a year or a couple times a lifetime then we might treasure the privileged of prayer more.  But we often miss out because God has made it so easy.

I will probably come back and read this another time.  But if you want a book on prayer and can pick this up for free on an ereader, I would recommend it.