Primal: A Quest for the Lost Soul of Christianity by Mark Batterson 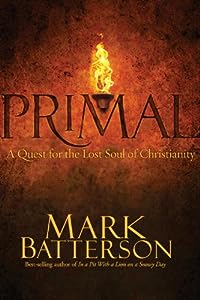 Takeaway: A partially lame church is not going to show the fullness of the incarnation.

I have been participating in a group blog working through Primal.  The group blog had a separate blogger blog through each chapter.  You can find all the posts here.

I blogged chapter 4 but wanted to give an over view of the book as well.

The point of the book as I understand it is to find the basics of the Christian faith to re-energize how we look at Christianity.  This is not an appologetics book or focused on discovering the theological or intellectual basics of the faith, but the emotional and spiritual basics of faith.

In general I think this book was very successful.  I was disappointed at first, because I thought the book would be about finding the soul of the church.  Instead, Batterson was trying to find the soul of Christianity for the individual.  In many ways this was very helpful.  The focus was on rediscovering the wonder of Jesus Christ and our the freshness of our faith that we had at the beginning.

What I really liked was the motivation.   Batterson thought, “I couldn’t help but wonder if we have accepted a form of Christianity that is more educated but less powerful, more civilized but less compassionate, more acceptable but less authentic than that which our spiritual ancestors practiced.”  So he was looking for a more powerful less safe Christianity.  In many ways, our suburban lifestyle has lead to a life where “…it’s much easier to act like a Christian than it is to react like one. Anyone can put on an act. But your reactions reveal what is really in your heart. And if you love God with all your heart, you won’t just act like it. You’ll react like it.”

I was recently talking to a friend about problems in her church.  Batterson, as a pastor, has a sense of these church problems.  He suggests that, “most church problems don’t come from the abundance of sin but rather from the lack of vision. I’m not suggesting that there aren’t sin problems or that those sin problems aren’t serious. But in too many instances, there isn’t enough vision to keep churches busy. Our vision isn’t big enough to demand all our energies, so we manufacture petty problems to keep us busy. I think the same is true on a personal level. If we had a larger vision of what God wanted to accomplish in us and through us, our petty problems would cease to exist because they would cease to be important.”  I think he is right in this.  In the face of the fact that people outside the church are not living the fullness of life that they were created to live, that people are literally starving because the church is not doing its job, that all around us people are mis-using the lives that they were given; the color of the carpet in the sanctuary really does not matter.

Which leads me to the greatest weakness of the book, its focus on the individual.  Batterson is the pastor of a church in Washington, DC.  It is an impressive church in its originality and its sense of mission, but the focus in the book is on the person, not the person that is a member of a larger body of Christ.  The illustrations that include the church seem to me like they are illustrations of how the individual work inside a church, not how the individual is a part of the larger mission of Christ in a local community.

That being said Primal is well worth reading.  If for no other reason than the sense of wonder and creativity that Batterson brings to faith.  Batterson is at his best when he is talking about wonder and creativity.  He ends the book focusing on the need to hold in tension our spiritual strengths (he self identifies creativity and spiritual wonder as some of his strengths) and the need to develop those areas where we struggle.  This is tough for all of us.  But I believe that we will be strongest when we surround ourselves in a local congregation that focuses on a variety of spiritual strengths, not just a couple.  We may be tempted to go somewhere that is just a large image of our own spiritual strengths.   But if we do we will become strong in one areas, but lame in another.  A partially lame church is not going to show the fullness of the incarnation.

i just purchased this book from Christian Audio for $2.98. looking forward to starting it.