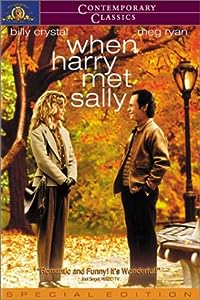 Cover of When Harry Met Sally

Over the next couple weeks a group of people will be reading and responding to the book Sacred Unions, Sacred Passions by Dan Brennan (my earlier review).  A chapter will be discussed each Monday, Wednesday and Friday until we are done.  Please come back and interact with us.  You do not have to have read the book, but it will likely help in the discussion.

Brennan understands that he is working against the grain to suggest that not only is it possible, but it is important to have friendships between men and women that are ‘non-sexual’, but still intimate and deep.  The classic movie When Harry Met Sally has the line  “…Men and women can’t be friends because the sex part always gets in the way.”  And most of us believe, and are taught, that Harry is right.

Throughout the book, Brennan tries to illustrate positive examples and reasons for cross gender friendships to break the dominance of Harry’s worldview.

Brennan’s point is that we as Christians have been instructed to be one as God the Father and Christ, the Son, and the Holy Spirit are one.  And while, marriage and genital sex are one way of expressing that oneness, it is obviously not the only expression of oneness.  Christianity is not a sex cult, so if we are to understand the oneness in Christ, then it need to be understood as something different than simply marriage and sex.

The problem with this illustration is that we do not often emphasis, or even desire, a sense of oneness within the Body of Christ.  In fact, some have suggested that John 17 is an example of an unanswered prayer.  In general, American spirituality is viewed primarily through a lens of individualism (private prayer and quiet time, a personal decision for Christ, individual spiritual growth).  So while I understand the illustration, I do not think it will move many people.  Brennan acknowledges the individual focus of much of Christianity, but he hopes that the desire for more will help us understand that the mystery of God can be explored at least in small part by the exploration of the mystery that happens between men and women.

I do think how he hints at the mystery of the oneness at the end of the chapter is useful.  The opposite sex is nothing, if not mysterious.  And while we often joke about it, there is real depth that can be found by intimately knowing another person and allowing that relationship to expand your view of the world and of God.

What do you think?  Is oneness in Christ a model for friendship (whether cross gender or not)?

I will choose one person who comments (randomly) and send you a copy of Sacred Unions, Sacred Passions to help you participate in the discussion. (The book winner has been chosen, if there is not a response or they do not want a copy I will go to the next person.

Thanks for the post, Adam. To be honest, I’m still musing on the first chapter of what is a very thought-provoking book. So for now, just to say that it seems apposite that Dan Brennan uses When Harry Met Sally as the anchor for the view that men and women can’t be friends. I guess many would claim it as the best exposition of the idea that Brennan is questioning.

As a rider to the argument, it appears that Nora Ephron, who wrote the screenplay, believes that men and women could be friends (if men worked harder at it); at least she wrote this in a published edition of the play:

‘Men know that they don’t understand women and don’t much care. They want women as lovers, as wives, as mothers, but they’re not really interested in them as friends. They have friends. And they talk to their male friends about sports, and I have no idea what else. Women, on the other hand, are dying to be friends with men.’

Although billed as a rom-com, I wonder whether When Harry Met Sally isn’t actually a celebration of Ephron’s wish fulfiment, of deeply satisfying transmarital friendship. Granted sex does get in the way, but isn’t the movie primarily a humorous celebration of the friendship of two maddeningly dissimilar people, drawn together by a mysterious empathy? Brennan uses the term mystery quite a lot, which is intriguing – as if what happens in cross-gender friendship is difficult to pin down, and designed to be difficult. (Will return to the theological implications when I’ve given it more thought).

That is an interesting shift from the play to the movie

Yes I do believe oneness with Christ is a model for friendship. However, before SUSP I’d never heard anyone reference a cross gender friendship as a Godly pursuit.

Just yesterday I had a lengthy conversation with two close friends (a married couple) about my most challenging, dynamic, difficult, and rewarding cross gender friendship. One of the most important things that got said, which was agreed with by all three of us, was that the Church desperately needs friendship, cross gender or same gender, if it’s going to be effective in teaching people what it really means to love one another.

In many ways, I think the call for friendships of any sort really is the most important focus of the early part of the book.

Unless we learn to exercise friendship, we don’t really have the body of Christ — just a collection of individual families revolving in parallel worlds. As long as we are afraid of cross gender friendship we are letting the church be another expression of the fall, instead the inaugurated now-and-not-yet kingdom. We are declaring that the discomfort between male and female is a more powerful statement of reality than God’s declaration that it is not good for man to be alone (which i have always read as the design for gender complementarity in every sphere of life.

Sure, some people can’t do it, or don’t want to. That’s ok. Some people don’t want marriage, some people never have kids etc. The fact that some won’t or can’t doesn’t negate the good of it.Some cross-gender friendships might go wrong. So what? There are marriages embroiled in adultery. There are many marriages that become abusive and destructive — does that negate the good of marriage? We need to be bold to love, risk-takers for grace — to live in fear is the breeding ground for legalism

The oft-quoted Harry Met Sally is obviously an over-simplification and exaggeration. Sex doesn’t get in the way of every cross-gender friendship. But I don’t think Brennan makes a very convincing argument for the need for cross-gender friendships by way of the Trinity. (Forgive me for going a little beyond Chapter 1 here.) I agree that there is an innate need for intimacy with the opposite sex, and that all Christ-followers need to be unified and in communion. However, I’m not convinced that necessarily means we are called to have intimate cross-gender friendships or that they are a good idea.

So, what I hear you saying is that its okay to have a cross gender friend, but not okay to be very close to them. Maybe its okay to have office chit-chat with them, but not to walk to lunch and talk alone. Is that where you’re coming from?

Jennifer I think you are reading too much into David’s comments.

Okay. I guess Im wondering what your distinciton between regular friendship, and intimate friendship is then. I’m curious about this because Im not really one for shallow friendships…if a friendship doesnt at least have a chance of knowing some intimacy, I dont really see the point.

Great question. I know it when I see it? Haha. Thinking about the friendships I have with women other than my wife, I would say that none of them are intimate. That is, there aren’t any I would call for advice or share a meal with just by ourselves. I wouldn’t share anything “personal” with them. That’s not due to any rule or standard per se. Frankly, I don’t have any desire to be any closer to them.

That said, my wife is friends with all of them, and I enjoy spending time with these women and getting to know them better with my wife alongside. In that context, I think I could be “close” with any of these women to the extent that my wife and I spend time with them and share our lives.

I suppose an intimate relationship by definition is 1:1. I can’t wrap my mind around how that would work without my wife involved. If people in other marriages have figured out a healthy way to do that, I say more power to them. I don’t have any moral issue with it. For me, I don’t have any desire to have an intimate cross-gender friendship.

David, to me that would be like saying, “I’m happy with my home. I don’t have any desire to stay as a guest in anyone else’s home.” The furniture, the decorations, the way life is lived in other people’s homes, can be such a rewarding experience. Same with friendships, same- or cross-gender.

I appreciate where you’re coming from.

I think when I read Sacred Unions I was applying it more toward intimate friendships (where there is 1:1, as well as time with others such as spouses present) I found the book helpful and beautiful because it addresses the possibility of intimate friendship between the sexes.

I liked Lynne’s point about getting past discomfort in cross-gender relationships. What I appreciate about Brennan’s books is the sense that something is happening generationally which is throwing men and women together more in the workplace, etc and that this is generating greater openness. He refers to Focus in the Family as a dated Christian paradigm (I didn’t understand this so I guess is must have States-side resonance which as a Brit I don’t get). Personally, I’d agree that we have all had to lighten up (Christians included) and welcome the change.

David, would be interested (without wanting to intrude) to know how you would distinguish between intimate and non-intimate cross-gender friendships.