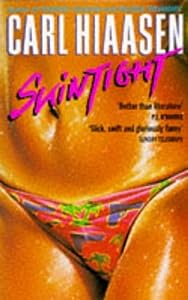 Takeaway: A summer beach read that treats Florida like a character.

Skin Tight is the second book by Carl Hiaasen that I have read.  The first book I read, Tourist Season, had one overlapping character, if you do not include the Miami area, which Hiaasen seems to treat like a character.  Hiaasen, a columnist for the Miami Herald, loves south Florida, but spends much of each of his books complaining about the increased population, the tourists, the corruption of local government and businesses in general.  There is a similar feel to both of these books.  You have one “good guy” that was pushed/left his previous job.  But is still connected and can get things done outside the law.  The good guy wants to see the right thing done, but isn’t all that worried about how it gets accomplished.  Meanwhile, Al Garcia, the good cop in both books, follows along behind, trying to stay within the law but getting slapped around on all sides by corrupt cops, incompetent police supervisors and politicians, competent crooks and strange events.

The set up in this books revolves around a dirty, incompetent plastic surgeon.  You know from almost the very beginning that he accidentally killed a girl in his operating room and did something to cover it up.  From there on out bodies keep piling up to cover up the one he originally killed.

Hiaasen’s writing is good.  He is descriptive, he draws you into the stories.  There is a creative amazement at the bizarre turns of events.  But in both cases I just didn’t really like the characters.  I like the “almost good guy” types of characters in many books and movies.  That guy that has a code of conduct that he will follow even if it gets him killed because it is the right thing to do.  So I would think I would like these books.  But I don’t.  It is not that I hated them.  I just didn’t really like them that much.

In both cases, I listened to them, the narration was good, and they were both free off of NetLibrary.  So I didn’t really lose anything.  I just am not sure I am going to try another Carl Hiaasen book.

Content warning: like his previous book this book is filled with language, sex and violence.  It is often told in a somewhat humorous way, but it is still occasionally quite gruesome.