Stones to Schools by Greg Mortenson 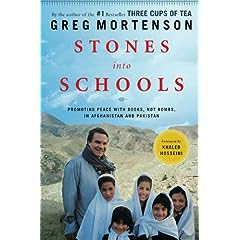 Stones to Schools is the second book by Greg Mortenson.  The first, Three Cups of Tea (my earlier review), tells of his failed attempt at climbing K2 and how he started the Central Asia Institute to build schools in Pakistan.  Stones to Schools picks up where Three Cups of Tea leaves off, right at the earthquake in 2005 that killed about 65,000 people.  The largest death toll of an earthquake before Haiti.

The discussion of the earthquakes in Pakistan and Kashmir are very relevant to the disaster in Haiti right now.  Especially the issues around uneven distribution of aid, lack of local cultural understanding and the use of aid for indoctrination.  He talked about how the only groups that thought that schools were important were, the radical Muslim groups.  And while many people in the areas that were supported by these radical groups were not radical themselves, they were required to send their children to the Madrases in order to receive aid from these group (usually in areas where the radical Muslim groups were the only ones giving aid.)

A significant part (in importance, but not time) deals with how Greg Mortenson has dealt with the requirements of running an organization that has grown quickly as a result of his first book (my review) Three Cups of Tea.  From 2005 to 2007 contributions tripled.  He went from speaking 8 times in 2005 to over 100 in 2007 (in more than 81 cities) and 169 days in 2008.  It is clear from reading the book that Mortenson is an introvert, and really would like best to be in Pakistan or Afganistan meeting with village leaders and teachers and students and helping to do the work on the ground.  (My wife saw him speak last year and said that someone asked how many language he speaks, she remembers him saying 9 fluently.)  But now that he is “famous”, the most effective thing for him to do to promote education in central Asia is to speak and fund-raise so others can do the work that he would like to be doing.  In late 2007 he had his first break down.  He talks about the fact that he can not allow the work of Central Asia Institute (his NGO) to suffer because of his own weaknesses.  So he keeps going.  And every couple weeks he has another minor breakdown and he has to hole up in a hotel or if possible go home for a few days.  But his opportunities today are too important for his weaknesses to overtake him.  (Seriously, we need to pray for this guy.  The work he does is important, his sense of mission and determination are incredible.)

Another important issue that Mortenson talks about is the US war in Afganistan.  He was invited to give a talk at the Pentagon and noted that one Tomahawk missle would fund the construction of 30 schools or provide enough supplies and teachers for those 30 schools for a generation.  He also spent some time talking to the military about the culture of war in Afghanistan.  It is interesting that there, a meeting is held before the war starts where they talk about the cost each is willing to bear.  Because the winning side is culturally required to provide support for the widows and orphans after the war.  Something that the US, when accidentally killing civilians does not do.  In spite of his strong words at that first meeting, he now has strong support from many US military officers and leaders and the US military has invested much more into building schools and other development work as part of it military campaigns to win the “hearts and minds” of the people.  I am also very encouraged, because Greg Mortenson is encouraged, that the commanders on the ground seem to understand the long term importance of helping local communities with schools, infrastructure and governance.  He has some strong words about poor policy, but in general, very positive words for those that he has worked with that are on the ground commanding.

At this point the Central Asia Institute has built more than 130 schools and is currently providing schooling for over 50,000 students.  Greg Mortenson has changed the world for those community (with the help of many donors, many workers and many volunteers.)

I think this is a book that fits very nicely with my earlier review of A Hole in Our Gospel.  This book has no religious motivation, but it is a perfect example of what the church should be doing based on the theology of A Hole In Our Gospel.  We need to continue to support and encourage work like this, whether it is explicitly religious or not.  Positive work that educates people will only pave the way for the Gospel later.