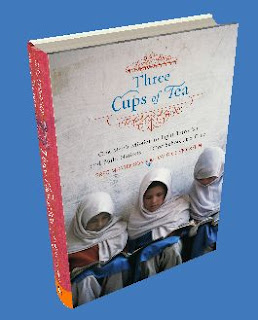 This week I read a very good book about a guy that builds schools in rural Pakistan and Afghanistan. It is called “Three Cups of Tea“. There are several thoughts I had about this book. First, he makes a strong point of the fact that what he does in rural development is a probably doing more long term to fight terrorism than much of what the US military is doing. It is certainly much more cost effective. He said that the cost one smart missile would build about 80 to 100 schools in a rural area or provide for the cost of supplies and teachers for about 80,000 students for a year.

The next points are really more about my thoughts that directly about the book. The subject of the book and co-author (Greg Mortenson) is a missionary child that grew up in Africa. He was fluent in Swahili and English and a couple other tribal languages. He has picked up Urdu and Paska and several other regional languages in order to communicate and work with the people in Pakistan and Afghanistan. But beyond is obvious skill in languge is his skill in intercultural communication. I have heard for years that one of the strengths of the Western missionary system is that many of the children of missionaries end up being much stronger than their parents because they are better able to understand the difference between culture and faith because they grew up with several cultures that were taught to them simultantiously. I don’t want to minimize the fact that many missionary kids seem to be damaged in this process, but those that thrive really need to be tapped as leader for a new model of missionary that is attempting to put the power into the hands of the local Christians.

I have also finished several stort stories collections. One is More than Honor, the last of the Honor Harrington short story collections. I am also about half way through Liaden Unibus II. The Liaden series is by husband and wife team Steve Miller and Sharon Lee. They have written around 10 full novels and several collections of short stories. I really enjoy these long collections that give you a bunch of characters over a long time.

Thanks for the review. I had seriously considered this at the store the other day, but chose a little fluff reading instead. I think I’ll return and pick it up. ~:-)

[…] to Schools is the second book by Greg Mortenson.  The first, Three Cups of Tea (my earlier review), tells of his failed attempt at climbing K2 and how he started the Central Asia Institute. […]