The Gospel According to the Son by Norman Mailer 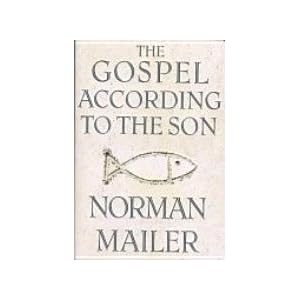 Summary: A fictional re-telling of the Gospels from the perspective of Jesus. Sort of like Christopher Moore’s book Lamb, but much less funny.

I know Norman Mailer only by reputation.  I have not read anything else by him.  The Gospel According to Jesus is fairly short and I thought it would be  interesting to see what a 20th century fictional account would be like.  In many ways, it was much what I expected.  It is a first person account told through the eyes of Jesus.  Mailer is respectful of Jesus as a character but does not seem to think that much of Jesus the actual person.

Fictional accounts of the bible are fraught with difficulty.  If you have heard some of the controversy over The Shack, then you know some of the trouble one can get into when you try to write a fictional account of God.  Mailer was not the first to attempt it and I am sure will not be the last.  I most want to compare this with Christopher Moore’s book Lamb.  Although Lamb was not first person Jesus (it was instead first person from the point of view of Jesus’ childhood friend Biff), it has much the same struggle of Jesus trying to understand who he is, and whether he really is the son of God.

My problem with Mailer’s perspective is that he wants all the internal struggle, but wants to do it from a materialist perspective.  He wants to wipe away most of Jesus’ miracles but keep a few, mostly it seems, to confirm that Jesus is the Son of God.  Much of what is in the gospels Mailer wants to suggest was exaggeration or occasionally when Jesus was not quite in his right mind.

Overall, this was a Jesus that many mainline/liberal Protestants of the 1950-1960 would have been comfortable.  That is not to say there isn’t something interesting in the book.  But what is interesting is really limited by the lack of imagination of Mailer.  What I do appreciate is that Jesus was human.  As an Evangelical, it is sometimes easier to remember that Jesus was God than to remember that Jesus is human.  But all too many want to make Jesus only human.  Mailer doesn’t completely do this.  Jesus is God.  But it is a weak God, one that is physically weakened by the effort of healing people.  Many of the things Jesus learns are from Satan and Judas.  Mailer wants to emphasize the humanity but doesn’t seem to understand the idea of someone learning good by being good.  Mailer’s Jesus only learns about reaching out to people by learning from Satan.

The biggest problem, theologically is that in the end Jesus’ death and resurrection did not achieve the victory over sin and Satan that orthodox Christians believe.  Mailer is deist in outlook, so Satan and God are equal.  The death and resurrection were a victory in battle, but not the victory in war.  In fact, Mailer goes as far as to suggest that Jesus’ death was a break in the relationship between the Son and the Father and the relationship has not been fully healed.  So while Jesus sits at the right hand of the Father, they rarely speak.

All in all, I have a hard time recommending this too much.  It is not that I am scared of people loosing their faith, this is not a theological treatise or even a great work of fiction.  It is more that I am not sure what Mailer’s musings have to say to us 50 years later.

By the way, while I really did like Lamb, it is much more sacrilegious in a funny way, but less in a larger theological picture.  And Lamb actually seems to take Jesus a bit more seriously as the son of God.  But as a warning, many people will be offended by it.