The Hole in Our Gospel by Richard Stearns 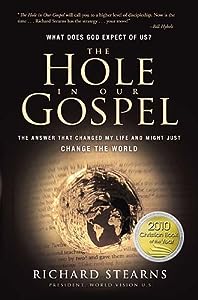 I have been sponsoring a child through World Vision for about a decade or so.  We are on our second child because the first aged out of the system.  I remember reading about the founding of World Vision when I was in college.  But after listening to the Hole in Our Gospel I have never been prouder to support World Vision.  I have several acquaintances that have worked for World Vision and I have always been impressed with their vision and dedication to their work.

If you have not read The Hole in Our Gospel, you need to stop and go buy it now.  Seriously, it is that good.  The basic thesis (told through his own biography) is summed up in a quote from Rich Stearns’ former pastors, “It is not what you believe that counts, it is what you believe enough to do, that counts.”  I think that this effectively counters all of the complaints about “social gospel” and “faith not works”.  Richard Stearns never questions the role of faith in Christianity, he strongly supports it.  Instead he questions the role of an incomplete faith that has no room for works.  If we are not changed by our faith, then is it really faith?  Have we really submitted to Christ our lives?  Are we really a Christian if our lives are just like those around us?  Are we really following the words of God (that speak throughout the scripture about the need to care for those that are poor, orphaned and widowed).

He spends most of the first half of the book either giving reason for why we as Christians should care for the poor, or convincing us that the poor really need cared for.  But right about the half way point he shifts the focus to a more positive one.  Giving us stories of how the poor are being helped.  He speaks about where the church (both universal and local) are not doing all they could or should be doing, but that critisims is done with love, and from a position firmly rooted within the church.

Stearns’ criticism of the church is summarized by some research that World Vision commissioned.  Local churches were asked to pick the three main focuses of their church from a list that was provided.  Only 18 percent of churches picked “working with the poor and destitute”.  Overall the top three were Worship, Discipleship and Evangelism.  These are all three important, and it maybe that many churches would have put working with poor as number 4, or maybe they view working with poor as part of Worship, Evangelism or Discipleship.  But having grown up in the church, and attending a very good church now (which I think would put “working with poor” at about 6 or 7 in priority) I think that Stearns is right when he says at least part of the problem is an honest lack of understanding.

However, a lack of understanding does not explain it all.  Before World Vision started a major campaign to expand its work with children orphaned by AIDS in Africa, it commissioned another study to evaluate Evangelicals attitudes about AIDS (this was in the mid-1990s.)  When asked if you would consider donating to a respected Christian organization that wanted to help children orphaned by AIDS only 3% said they would definitely consider it.  58% said they would definitely not consider it.  The smallest proportion of any group (including non-Christians, Atheists, mainline Christians and Catholics).  Esentially Stearns ask the question that Donald Miller, Andy Stanley and a variety of others keeps asking lately, “What story do you want told about you when it comes time for your children to ask you how you responded?”  We know how we feel about our parents, grand-parents and others that did not fall on the right side of civil rights, apartheid, and slavery.

This really is a book that you should read and read soon.

FTC Disclosure: I was supposed to get a free copy of this book from Thomas Nelson to participate in their Blogger Program, but they ran out of copies before mine was sent.  I went ahead and reviewed it with them, but I paid for my copy.  It was purchased at Audible.com.  The links above to Amazon are affiliate links.

Thanks for sharing your thoughts! Sounds like a great book!

I plan to read The Hole in Our Gospel. My church supplements food for approx 50 families in need every month. There is always someone who tries to work the system (double-dipping, etc) and there are members of my church who would let the 49 families go hungry in order NOT to help the one who is getting more than his/her share. It's sad.
But at the same time, I have seen the attitudes of some people in the church completely transformed because of our mission work. One woman who used to grouse about the Missions Program now brings the committee lunch on food distribution days because her son was helped by the program while he was out of work. Sadly, it is difficult for people to relate to real need unless they experience it for themselves.

There will always be people that abuse the system. That is called sin. And if we refuse to help people because of sin, then we are just perpetuating sin.

I know it isn’t really that simple. I have been disappointed by people abusing me, I don’t help everyone that asks, and I would love to get appreciated like I think I deserve. But that is part of the struggle of obedience. Thanks for the comment.

i appreciate both of these comments. thanks.
.-= chris´s last blog ..Evolution: America’s Biggest Barrier to Christianity? =-.

[…] think this is a book that fits very nicely with my earlier review of A Hole in Our Gospel.  This book has no religious motivation, but it is a perfect example of […]

[…] in our Gospel by Richard Stearns as its monthly free audiobook.  I am a fan of both this book (my review) and christianaudio’s free monthly audiobooks.  Go get it.  It is well worth the […]

[…] So I thought I would link to two blogs I trust for second opinions.  First here is my original review. […]

[…] The Hole in Our Gospel by Richard Stearns – This book is free this month on audiobook at christianaudio.com […]