I listened to about two hours of both of these books on audio.  I just could not get into either one. 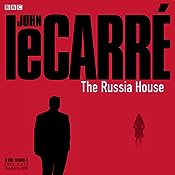 I really want to watch Tinker, Tailor, Soldier Spy.  Sooner or later I will get to it. What I like about all of the reviews of the book is that people keep saying it is a slow spy novel about ideas more than action.  I tend to like books that are more about the ideas than the action.

But the price of Tinker, Tailor, Soldier, Spy has been a bit high (now $12.99) and it is the fifth book in a series and the first four are not in kindle format.  (Yes it is the first of a trilogy within the larger series, but I still like to read books in order.)

But I saw that my library had The Russia House in audio.  So I picked it up.  It is one of eight of John LeCarre’s books that have been made into BBC radio dramas.  They are all abridged (which I hate).  I don’t usually dislike radio drama.  I listened to a ton of them as a kid.  But this one was too confusing.  I am not sure if it was the abridgement or the radio drama.  But while I basically knew what was going on, it just did not engage me.  I think what happened was that the drama kept all of the action and cut the character development and ideas.

Summary: The world has been destroyed and has lost its technology, its faith and its knowledge.

I picked this book up on kindle when it was offered for free quite a while ago.  But I did not get around to reading it.

Then this month Christianaudio.com is giving it away for free.  So I started listening to it to try to review it before the end of the month.  But it just felt too contrived.  Maybe I needed to read instead of listen to it.  Or maybe I just needed to stick with it longer.

But I could not get into the story.  It is pretty well reviewed.  And I like to encourage good Christian fantasy and science fiction because there is so little of it.

So if you want to try it out, the audio is still free until the end of June 2012.  And if you want to borrow the kindle version it is lendable and I have a copy to lend.

The Sword by Brian M Litfin Purchase Links: Paperback, Kindle Edition, Christianaudio.com MP3 Audiobook (free for July 2012) – Kindle book is available to be loaned.  Leave a comment below if you want to borrow it.