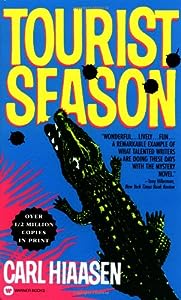 Takeaway: A somewhat dated humorous mystery. Decent writing, liked it, did not love it.

Tourist Season was my first attempt at listening to a complete book from NetLibrary (my post about it). The audio quality was not perfect, but I am fully willing to admit it may be more about my player than the actual quality. I need to listen to a few more NetLibary books really talk about the audio quality. It is hard to complain too much about the quality of a free book. It was much better than some audiobooks that I have paid for. So I would definately recommend trying out NetLibary if you can.

I have not read anything by Carl Hiaasen but I have seen many positive reviews of his books.  Tourist Season is about 15 years old and feels dated.  There were no cell phones, the computers were very limited, etc.  It feels like a book written in the mid-1980s.  I would characterize this as a humorous drama book.  It has some fairly heavy themes: terrorism, crime, murder, radical environmentalism, corrupt government and problems of capitalism.  But it is written for the laugh.  Not that dissimilar in tone from Christopher Buckley’s novels, but much less political.

The basic plot is about a terrorist group that is trying to empty Florida of all residents for a variety of reasons.  The terrorists are inept, but so are the cops, the newspapers, the local government and local chamber of commerce.  It is probably better than it sounds from my description.

I liked the book enough to finish it and probably get another Hiaasen book in the future, but I did not love it.  The characters were a bit two dimensional and occasionally just weird.  For more delicate readers the language was fairly coarse and there were several descriptive, but not graphic sex scenes.

[…] Tight is the second book by Carl Hiaasen that I have read.  The first book I read, Tourist Season, had one overlapping character, if you do not include the Miami area, which Hiaasen seems to treat […]