Twice a Spy by Keith Thomson 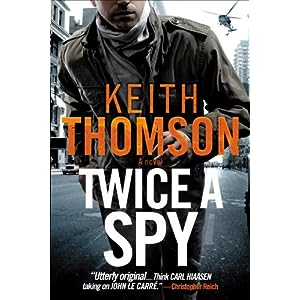 Takeaway: Spy Thrillers are about the chase.

Twice a Spy is a sequel to Once a Spy, one of my favorite books last year.  The basic premise is that Drummond Clark, a retired appliance salesman, with middle stages of early onset Alzheimer’s, is actually a super spy.  Charlie, his estranged son, is an addicted gambler with a drinking problem.  But once Drummond breaks from his watchers, everyone is out to get him.  The good guys are afraid of what he will say, the bad guys want to know what they can get from him.  Charlie is just caught up in it all and Drummond has a hard time remembering that anything is going on.

Once a Spy was a great unique take on the traditional spy story.

Twice a Spy had a good bit to live up to.  It was set only a couple weeks after the end of the first book.  Charlie and Alice are trying to get Drummond experimental treatment to counteract the effects of the Alzheimer’s.  But not everyone knows that Drummond is out of the weapons sales business.  Alice is kidnapped to try to force Charlie to give up the secret of where a nuclear bomb is located.

This book is even more action packed than the last.  The story is set, we know the characters and the motivations of what is going on and we expect Drummond to be able to handle the super-spy stuff during his brief periods of lucidity.  But Charlie has to step it up and start handling some of it on his own.

Overall, I enjoyed it as much as the first.  It was more action oriented, but that felt appropriate.  I was not as happy with the ending.  It just felt a bit too rushed.

It certainly is not a stand alone book.  It is more a continuation with a very brief interlude.  It would have been a very long single novel, but that would not have been bad.

It does seem natural to make these into a movie, but it would probably be a single movie, not two.  If you are looking for a future beach read and like spy thrillers, these are good.

This book was provided by the publisher for purposes of review.