EM Bounds: Man of Prayer by Lyle Dorsett (give away) 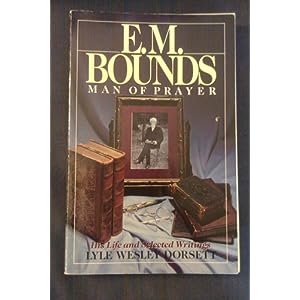 I was originally introduced to EM Bounds by Lyle Dorsett when I was a student at Wheaton College.  Dorsett spoke to a summer missions group that I was a part of and suggested we read several books.  One of those books was Power in Prayer by EM Bounds.  I really do not remember much from the first reading.  But I got enough out of it that that I have re-read Power Through Prayer and several other of Bounds’ books.  (Christian Classics Etheral Library has 8 of Bounds books for free download.  Amazon has a variety of prices because they are public domain books and anyone can offer them for any price.  One book is a copy of the 8 books as a single file for $3.99 if convenience is easier.)

Because there was no real biography (outside of a couple of paragraphs here and there) Lyle Dorsett decided to write a short biography.  It was first published sometime in the late 1980s and then re-printed for the last time in 1991.  It is a short booklet, only about 70 pages.  There is very little original source material to base a longer biography on.

In some ways it is surprising that more is not known about a man that has had at least one of his 11 books almost continually in print for the last 100 years.

What is known is that EM Bounds was a successful lawyer when he was convicted by the Holy Spirit to a deeper spiritual life.  Within months he shut down his law practice and started studying scripture full time.  Within a year, he was ordained and serving at a church about 40 miles from his home in Shelbyville, Missouri.  This was 1859.  The church was part of the Methodist Episcopal denomination, which was in process of a denominational split over slavery.  The church was built with local funds and built only after the church officially joined the breakaway Methodist Episcopal South.

The original Methodist Episcopal denomination used the courts to claim ownership of all breakaway churches.  EM Bounds was arrested and held for 18 months without trial when he objected to his congregation being ejected from their church.  He was released as part of a prisoner exchange program with the Confederacy that had since formed.  He was not given a chance to join the Union, in spite of the fact that his two brothers were Union soldiers and that he was on record as being against slavery.

Bounds became a Confederate Chaplain and served as a chaplain until he was re-captured after the battle of Franklin.  He was then released after several months after taking a US loyalty oath.  He was not yet 30 at this time.

After the war he was a pastor in Franklin, TN and then St Louis before being tapped as the associate Editor of the Methodist Episcopal denominational newspaper.  He was first married in St Louis when he and his wife were 41 years old.  After a decade of marriage, Bounds’ wife died.  He remarried his wife’s cousin, his wife’s dying wish.  Within the next three years he had two more children and lost two boys from the first marriage.

By the 1880s, Bounds, was forced to move in with his new in-laws.  He resigned from his job at the denominational newspaper over a disagreement with the denomination (and his boss) about whether the Methodist Episcopal church should have officially licensed evangelists (he supported it).

The rest of his life he lived in Washington, GA (in his in-law’s home) in obscurity.  His normal day started at 4 AM with prayer until 7.  Then breakfast and the rest of the morning was spent in writing and prayer until noon and other work after lunch.  It was here that he wrote all of his books.  Bounds might be still in obscurity except that a New York pastor found a copy of one of his books and initiated a friendship.  Bounds mentored him over almost 10 years before his death.  After Bounds’ death all of his books were published or republished.

One of my questions is about his own life and message.  He seems like he might have been a hard man to be around.  He insisted that his kids get up at 4 AM for devotions with him for the first hour.  Even guests of his children were turned out of bed to participate in devotions at 4 AM.  Two of his children left the church, never to return, in large part because of their rejection of the life of hard devotion and poverty that their father illustrated.  Unlike A.W. Tozer (my review of Dorsett’s bio of Tozer), Bounds was said to be a very loving father and deeply interested in the spiritual and physical life of his children and spouses.  E.M. Bounds, seems more like a person that I would seek to emulate than Tozer was.  But still, I wonder, does God call us to reject the world in the same way that Bounds’ seemed to.  There is no questions that he wept over the world and the people around him in his prayers.  He was devoted to interceding on their behalf in prayer, and I would like to have that devotion to people to pray for them in that way.  But I also wonder if his children and others would not have preferred that he spend at least some of that prayer time with them?

This little booklet is out of print. But christianaudio.com was giving away a digital copy of the audiobook last month and you can still get it this month from either christianaudio.com or from audible.com.  I hope the booklet will be reprinted on ebook soon.

Since I picked up the digital audiobook last month I will give away my copy of the CD audiobook to a random commenter who leaves a comment here before Friday June 25, 2010 at 11 PM EST.

Other biographies by Dorsett that I have enjoyed:
A Passion for Souls (DL Moody)
A Passion for God (AW Tozer) – My Review
And God Came In (Joy Davidman, wife of CS Lewis, book the movie Shadowlands is based on) – My Review