Eye of the Storm by John Ringo 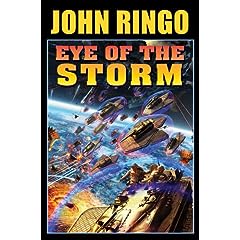 As I have said before, I am a big fan of Baen publishers.  They have been working with ebooks long before the Kindle.  I have been reading Baen ebooks since around 2000.  I started reading on my Dell Axim pda.  I have now read well over 100 Baen books.  Many of them are miliary based science fiction.  I was a fan of this series when it started.  But now there have been 9 or 10 books in this universe and it is showing its age.  The previous book I reviewed and said no one should read it.  There were two more I didn’t even bother reviewing that were even worse.

This was the first real book under the restart of the series.  Like many of these books, it feels like a chapter of something.  Not a great ending, just another chapter in a longer series.  It isn’t nearly as good as the first four books in the series but it is much better than the previous several.