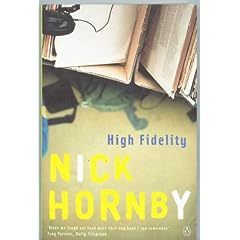 This was a free audiobook from Audible.com.  I saw the movie but hadn’t read the book before.  The book was based in London instead of Chicago (Not New York, thanks Jay) but had a very similar sensibility.  It was well written and much more centered around talking about sex than the movie.  (And less about the record store than the movie was.)

It was also more internal in the main character’s head.  Frankly he is a bit annoying.  He knows what he should be doing but can’t seem to do it.  He gets stuck and just doesn’t move on.

I am not sure if I would like it better if I was 10 years younger and single or if it is too dated.  But as a married guy in my late 30s, I am just not all that interested in his issues.

The book is well written and the story moves fairly well, but it just wasn’t for me.

Actually, the movie took place in Chicago, not New York.

I read the book too and didn’t care for it too much. I also saw the original script for the film. In it the character of Barry is much more mean than what was brought to the screen with Jack Black. It’s one of the few times I think the movie adaptation was actually better than the book.

I agree the movie was better. I think in part it is because it isn’t quite as self absorbed. But then again it may be because I haven’t seen the movie in a long time. (Thanks for the geography correction!)

Hello,
Amazing! Not clear for me, how offen you updating your http://www.mrshields.com.

I am trying to maintain a 3 times a week schedule now. Not sure if I can keep it up but I am good into the holidays.

Hello,
I have already seen it somethere…
Dolly