Since Bookwi.se now has more than 500 book reviews, I felt it was time to start making the back catalogue a bit more useful.  I will continue to add to these topical indexes as trends arise and I have time.

Bookwi.se most recommended books on Prayer

If you really are serious about wanting to read about prayer this is probably my first recommendation.  It is focused on the various methods and spiritual disciplines around prayer.  Foster is seeped in historical Christian writings and liberally quotes from them and his own experience.  I have reviewed this twice.  First review, second review, but I have have read it at least three or four times.  This is a books that welcomes multiple readings.

A Praying Life: Connecting With God In a Distracting World by Paul Miller

This is my second most recommended book on prayer.  It is more of a practical look focus (instead of this historical and spiritual discipline focus of Richard Foster’s book).  Again I have read it several times and reviewed it twice (first, second)  If you are a parent, Miller spends a lot of time talking about praying for his children and spouse and uses his own family and prayer life as continual illustrations.

The Jesus Prayer: The Ancient Desert Prayer that Tunes the Heart to God by Frederica Mathewes-Green

Together in Prayer: Coming to God in Community by Andrew Wheeler

Prayer is something that is often difficult for groups to do together well.  This is the only book I am aware of that looks at particularly how to lead prayer in a small group setting.  I have read it before starting to lead my last two small groups.  I probably will read it again before I start my next small group next month.  It is very practical.  My first review and second Review 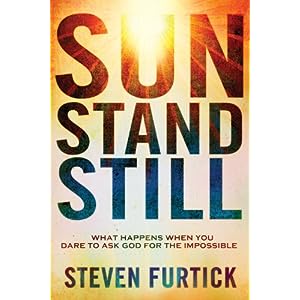 Sun Stand Still: What Happens When You Dare Ask God For The Impossible by Steven Furtick

I attend a megachurch.  One of the particular problems of megachurches is that they are huge and powerful.  If they really want to get something done, they can probably do it.  They can raise millions of dollars, or volunteers thousands of hours or make very significant impacts on a local community. What can get lost is dependence on God in prayer.  This is a good book to remind us to pray those really large prayers for things that cannot happen without God’s power and intervention.  This book calls us to be ‘more’ as Christians.  But instead of focusing on our behavior or spiritual disciple it focuses on God’s power to make us more.

Other Bookwi.se Reviewed Books On Prayer

The Hidden Life of Prayer: The Life Blood of the Christian by David McIntyre – A classic book on prayer from the early 20th century.

On Earth As It Is In Heaven: How the Lord’s Prayer Teaches Us to Pray More Effectively by Warren Wiersbe

Praying God’s Word: Breaking Free From Spiritual Strongholds by Beth Moore – Good practical introduction on how to use the bible to guide your prayers, do not get this as an audiobook.

Contemplative Prayer by Thomas Merton – Written to instruct Monks on how to pray, this is not a book for everyone.  But it has some very interesting insights into the Catholic theology of prayer as well as some useful insights into the relationship of work and prayer.

EM Bounds: Man of Prayer by Lyle Dorsett – a short biography of one of the most influential writers on prayer.

Praying the Book of Acts by Elmer Towns – a paraphrase of the book of Acts written in a way to turn most of the book into a series of prayers.  Better in theory than in execution.

In Constant Prayer by Robert Benson – part of the Ancient Practice Series, this is a good introduction for Protestants interested Fixed Hour Prayer.

Living Prayer: The Lord’s Prayer Alive in You by Dennis Fuqua – this is the best book on the Lord’s Prayer I have read, but I need to read it again and blog about it again.  The two posts about is are not very good.  There is a new edition of the book that I have purchased but not had time to read.

Prayer Guide: A Manual for Leading Prayer by Lowell Snow – this is a very practical book on how to lead prayer in a wide variety of situations.

Fresh Encounters and The Church That Prays Together both by Daniel Henderson were reviewed in a very early post on what became Bookwi.se  Both are good introductions on how to move your church toward taking prayer more seriously.

I like the idea of prayer books, but I have not regularly followed one for more than a few months at a time. All of these are good prayer books, but most of them suffer from formatting issues that make them less than perfect for use on kindle.

Eastertide: Prayers for Lent Through Easter From the Divine Hours by Phyllis Tickle – this review talks about what I think need to go into a properly formated prayer book for kindle

Christmastide: Prayers for Advent Through Epiphany from the Divine Hours by Phyllis Tickle

The Divine Hours: Prayers for Summertime by Phyllis Tickle