The Unlikely Disciple: A Sinner’s Semester at America’s Holiest University by Kevin Roose 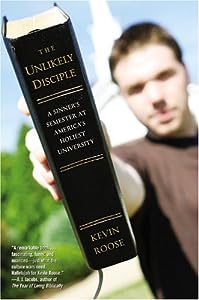 Takeaway: If you are from an Evangelical background, you need to read this book. Others will be interested in a stunningly good ethnography from a young writer.  But Evangelicals need to read it.  My favorite book of the last several months.

I have been reluctant to read The Unlikely Disciple since I first heard about it.  I was afraid it was going to be another writer talking about “those Evangelicals”.  But what I found was an increadibly loving portrayal of a people that Kevin Roose really worked to understand.  I identified a lot with the book.  So that probably is going to skew my review of it.  I went to Wheaton College (a much smaller, much less conservative, but still Christian college).  But I also went to University of Chicago Divinity School for seminary for some of the same reasons that Kevin Roose went to Liberty.  I understood the Evangelical world, I wanted to understand theology and Christianity from a different perspective.

What most impressed me about Kevin Roose was how hard he really tried to be a Liberty student.  He sang in the Thomas Road Church choir, he went on a Spring Break Evangelism trip to Daytona Beach, he sought out one of the campus pastors as a spiritual mentor and actually did everything that was suggested, he spent time praying on his own.  This is a student that gave his all into being a Liberty student.  And I think in large part because he gave everything to it, he began to love Liberty.  Not all of it, but certainly the people.

Roose still had frustrations, they are not all the same frustrations that I have, but there are many overlapping categories where I as a Evangelical and he as a non-Evangelical are concerned about the same things about Evangelicals.

There are some points when I think he just gets his analysis wrong.  Not all of this is his own fault, Evangelicals can be quite convoluted in the way that we talk to one another and interact.  One example is his analysis of Young Earth Creationists and Evangelical Intellectual thought.  He quotes a biology professor as saying that no matter what the evidence, he will continue to believe that the Earth was created in 7 days as scripture teaches.  And while he admires the faith of this statement, he believes that level of faith without consideration of evidence, should mean that the professor should not be teaching.  Up to this point, I mostly agree.  I have a friend that went to a semester at a more conservative Evangelical school than Wheaton, and was extremely disappointed.  My friend’s best example was systemic theology, which he took both at Wheaton and the other school.  He told me that at the other school there was no questioning, the material was presented as the only way to believe and very few opposing viewpoints were even presented, let alone given a fair presentation.  While at Wheaton, not exactly the most liberal school around, there was at least real engagement.  We were able to work through issues to bring us to a point of not only understanding what, but why.

My issue came when Roose ties another statement from another professor to the same line of thought, “I fear that you will become educated beyond your obedience.”  I have been using this line and maybe I am using it in a different way.  But when I use it, I am not disparaging knowledge and intellect, I am disparaging obedience.  Roose takes it the opposite way; he sees the students’ obedience as fine, although he has just finished a chapter about how obedience does not meet the social ideals of Liberty. Roose is concerned that in spite the fact that he does not see a monolithic obedience to norms, it is the lack of intellectual engagement that is the problem.  (This is the Mark Noll Scandal of the Evangelical Mind thesis.)  I do not completely disagree, but I think that this is an area where more time might bring him to a different conclusion.

What was so engaging was not the analysis, although that was interesting, but the story.  I cared about whether Roose would get caught.  I cared about the fact he struggled with the emotional toll of hiding his real feelings and identity.  I cared about the spark of a love interest.  At the end I really wanted to know how everything was going to turn out.

This is a book that was enhanced by listening to it in audiobook.  Kevin Roose read the book and he gave voice to his friends and professors.  There was real care and emotion in the preparation of the audiobook and there is just no way that I could have absorbed all of that just through print.  There was also a 30 minute post interview of Kevin Roose by his publisher at the end of the book.  If you have the choice, I would listen to the book, but regardless you still need to get it.

i’d like to get my hand son this one. where do you suggest buying the audiobook for cheap?

Check your library first. But cheapest is probably Audible.com. If you just buy without a membership it is $15. You can sign up for a trial membership and get two books free and then cancel if you want. I love my audible membership. I can listen on my kindle, my ipad, my blackberry, my zune or my computer. And at this point I have been a member long enough that I have about 400 audiobooks. Even if you don’t get a membership, it think it is the cheapest place.