Since Bookwi.se now has more than 600 book reviews, I felt it was time to start making the back catalogue a bit more useful.  I will continue to add to these topical indexes as trends arise and I have time. Links are the the longer book review.

So far in my reading about how to appropriately disagree among Christians, the best book I have read is Uncommon Decency: Christian Civility in an Uncivil World by Richard Mouw.  His basic point is that we should start with our own sinfulness in mind and not ‘the wrongness’ of the other.  This book is more about holding to a standard of decency when dealing with non-Christians.  But it is relevant to Christians as well.  One of the important thoughts in this book is that we need to be clear about not only what we are for, but the methods of how we communicate what we are for.


Randy Alcorn’s The Truth and Grace Paradox: Responding with Christlike Balance is more about evangelism and than about how to disagree well.  But there is some overlap in the concepts.  The sections on Grace are better than the sections on Truth because Alcorn does not have a clear and consistent use of the concept of Truth.  His takeaway phrase is that we must be 100% Grace and 100% Truth, not 50% Grace and 50% Truth.  I think it is a good reminder, but not a great book.

Saying Yes to No: A Biblical Approach to Disagreement Among Christians by Patrick Webb is the only book I have read that is solely on proper disagreement among Christians.  This is a subject that needs more research and writing.  Webb is focused on the ‘how’ of disagreement.  I appreciate that he sees real value in not only the method of our disagreement, but the actual disagreement itself.  Disagreement can serve a purpose.  That being said, this isn’t a great book.  It uses a couple of biblical examples, but skips over all of the ones I would have used. Paul and Peter and the eating with Gentiles, Paul and Barnabas and timothy, Paul and the Judiazers, I Cor 11 where people discuss following Paul or Cephas or Jesus or Apollos are all good examples, but none of them are discussed.

The Civil War as Theological Crisis by Mark Noll is a great history of the theological issues around the Civil War.  I highly recommend this book as a exploration of how we use scripture.  A significant theme of the book is the disagreement among Christians on both sides of the Civil War.

I thought The Future of Justification by John Piper was only OK as an overall book.  But the introduction about how we should properly disagree as Christians is the best short article I have read on the matter.  I am not sure that Piper really followed his rules throughout the book, but the introduction is well worth reading.  If you have an ereader, you can download the PDF of the book for free from Desiring God’s website. 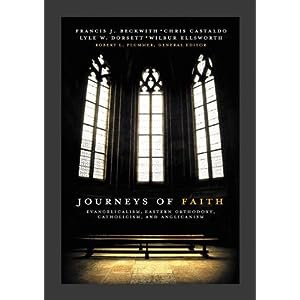 Journeys of Faith: Evangelicalism, Eastern Orthodoxy, Catholocism and Anglicanism is a book about conversion from one Christian stream to another.  The book itself is not about disagreement.  But it is set up as a disagreement.  A person tells their story, then there is a response to that conversion that primarily deals with theological issues of the conversion, then there is a rebuttal by the person that converted.  The book has good examples of both good disagreement, and not as good

Mistakes Were Made (But Not By Me): Why We Justify Foolish Beliefs, Bad Decisions and Hurtful Acts is not about disagreement. But it does have very good insight into blind spots that we all have and how and why we ignore them.  This is not a Christian book, but I think it has some very important implications to how we disagree and why we need to both own up to our own mistakes and give a lot of grace to others as they make mistakes.