Good books mixed up in a bad book

Again it has been a while since I have posted.  I have participated in two group blog discussions, one about the book Flickering Pixels by Shane Hipps and one about Mad Church Disease by Anne Jackson.  I recently bought four books on prayer.  I have been reading a bunch of books on prayer and intercession, both because I am interested and because I feel like if we are going to take God seriously, then we have to take him seriously throughout.  So if he is powerful and we are not, and we are asking him for help then we should expect that he can actually help us.  So I am continuing to explore prayer and intercession.  The four books I bought were all on clearance at the Prayer Shop (and I had a $10 coupon off $30, so they are paper books, not for my kindle.)

The current book I am reading (along with about 8 others) is Seasons of Intercession by Frank Damazio.  The first red flag is that it has an introduction by Ted Haggard.  Now it was written in 1998, but I still will have a hard time passing it on because it will be tainted by Haggard’s sins. 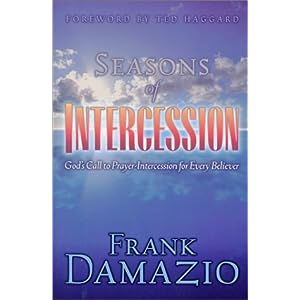 I am only a couple chapters into it, but I already have a lot of questions.  First, the book starts off with the assumption that modernity is good and post-modernity is bad.  So I am immediately on the defensive.  (I never understand how people can start talking about truth and the bible and the need to go back to absolute truth and with a straight face reference authors from the middle ages and before in support of their views of absolute truth.)  Sure I believe in truth, I just think we need to be much more humble about what is absolute.  And when you start a book on prayer with a two chapter discussion of absolute truth I am concerned.

The third chapter is concerned with the twin evils of music and television.  The quote on music is that, “Rock music has one appeal: young people know that rock has the beat of sexual intercourse.”  And on TV, the main quote is, “Unless the program is made for the Simpsons or Adams family, how can anyone receive anything from television.”  So music and TV are evil, this just keeps getting better and better.

Chapter four is about “the so called Generation X”, the “generation that is…lazy, dysfunctional and anti-intellectual.”

I have read through chapter 8 as of right now and it does get better.  So if you happen to read it (or want my copy once I am done) skip to chapter six.

Music and TV don’t have much to do with prayer. sounds like he wanted to write a book and rant about the evilness of the world, but figured calling it “intercession” would help.

I think you have the basic idea right Stephen