The Stephanies by Lexi and Kevin Hendricks 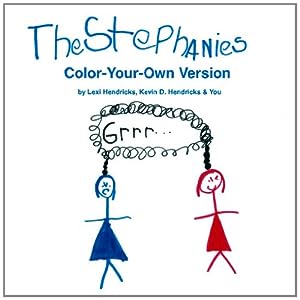 Summary: A cute early reader books about two girls that do not like one another because both of them are named Stephanie.

One of the things I have most enjoyed about book blogging is getting to know authors (at least on line) over time.

Kevin Hendricks and I met online after I read his book Addition by Adoption. Over the past couple years I helped format two of his books for ebook release (Open Our Eyes and Outspoken: Conversations about Church Communication)

This summer Kevin and his 6 year old daughter wrote a book together.  Kevin used a Kickstarter Campaign to get the book published and yesterday the book officially launched.

The Stephanies is a early reader book about two girls that do not like one another because they both have the same name.  Over time they figure out how to be friends.  I picked up the kindle version, but I think I am also going to buy the Color Your Own version so I can read it with my nieces and let them color it as well.

Encouraging kids that they can do real things, like be an author, is important not only for Kevin’s daughter Lexi, but also for other children that read the book.  Telling other children that ‘this book was written by a girl just like you’ can be empowering.

Below the purchase links is a video of Lexi reading the book.  Go pick it up and encourage the creation of art!

Awesome that you’re going to pick up the Color Your Own version! Thanks for the kind words.